Steam locomotives in Dej was founded at the initiative of some passionate railway workers in 1992. It is the only museum of its kind in Transilvania. You can admire over 20 steam and electric locomotives, but also railway coaches that made history in Romania. 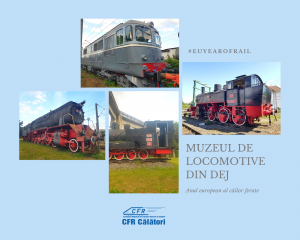 The oldest exhibits, a steam locomotive and an electric locomotive, dating from 1908.

In the museum there is a museum coach with objects specific to the depot activity.

The museum is organized in open-air, the entry is free and most of the exhibits can be seen from above, from a walkway crossing the depot Dej-Triaj.