The railway offers Europe a truly connected future. Cooperation between railway companies already leads to a uniform network in which key areas align their programming processes, overcome language barriers, simplify the rules and technical requirements of the European Union for trains to run across borders. 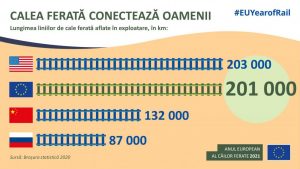 In this way a new infrastructure capacity is created, in particular for the connection of industrial parks to the main freight network, as well as the completion of the European network linking capitals and big cities. Such rail connections between countries contributes to the creation of a European identity and to the shaping of common values. At the local level the railways provide transport and mobility services, offering passengers more options.

The Connecting Europe Express train is a unique project involving the European Commission, the European Railway Community and Infrastructure Companies (ERC), European railway operators, infrastructure managers and many other partners at Community and local level. Conceived by the European Commission as part of the European Year of Railways and with the help of unprecedented collaboration between railway companies, the Connecting Europe Express train will cross the continent this autumn – over 40 cities in 26 countries in 36 days. The train will demonstrate the power of the railway to connect people and companies, but also the importance of EU infrastructure policy that makes this possible.