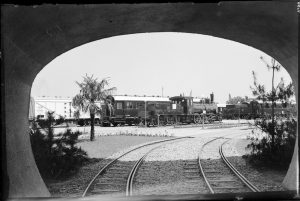 82 years ago, the Romanian Railways (CFR) organized a great event in order to celebrate 70 years from the inauguration of the first state-built railway line, namely the Bucharest – Giurgiu line. This event was called “Ceferiada” and was intended to last for 3 days but, due to public demand, it actually lasted for two weeks.

“Ceferiada” began on the 10th of June 1939, in the presence of King Carol II, Voivode Michael and Pince Paul of Greece. The event took place on the CFR stadium in the Giuleşti district and was attended by over 25,000 spectators.

The railways were defined as the economic engine in the first part of Romania’s modernization, the „Ceferiada” highlighting the railmen’s constribution to raising the sentiment of national pride.

In 1869, the shortest road to Vienna was from Bucharest to Giurgiu by train, then by boat on the Danube up to Vienna.
The construction of the railway line was finished on the 26th of August 1869, King Carol I departing on board a train to Giurgiu, then travelling by boat to Germany.
The Bucharest – Filarest – Griugiu railway line, with a length of 67 kilometres, was an isolated line, connecting the Capital with the Danube, while being also a direct connection with the Orient and the West.
It is the 10th railway line built on Romanian territory and was open to railway traffic at the end of October 1869, when it was officially inaugurated.
At that time, two festive trains departed 15 minutes apart the Filaret station, the oldest railway station of the Capital. The first train was driven by the constructor itself, John Trevor Barkley, while the second was driven by the first Romanian train driver – Nicolea Tănase.