140 years from the first railway built entirely by Romanian engineers

The Buzău – Mărășești railway route, opened in 1881, is the first railway built by a railway unit of the Romanian state. The construction was a real success, which started the construction of railways in Romania, without foreign concessionaires.

Inaugurated on October the 18th, 1881, the construction of the Buzău – Mărășești railway line – “the first rail line that directly connects Moldova with Muntenia” (The Time newspaper from 1881), meant a complete success of the Romanian railway technique. The route was well chosen, with many alignments (the longest was 18 km), required the construction of eight wooden bridges, and the costs were much lower than in any other country in Europe. The motor rolling stock came from the rolling stock of the Russian railway lines built during the War of Independence, such as the Russian locomotives “Unirea”, “Independenţa”, “Şoimul”, “Putna”, etc.

During the construction of the Buzău – Mărășești railway line, several important events took place for the Romanian railways.

It should be noted that at that time most of the world’s railways were built and operated by private companies. Considering this fact, the takeover by the Romanian state of the construction, operation of the railways and their administration through a general directorate represented an act of courage, but also the fact that the country had confidence in the training, capacity and energy of the competent staff.

Immediately after the creation of the General Directorate of C.F.R., the development of the network and its operation took a big leap. By the end of the First World War, the Romanian railway network almost tripled compared to the one existing in 1879, reaching 3,838 km of railway in operation, with over 400 of railway stations and stops. The growth of the network between 1879 – 1919 was on average about 60 km per year. The budget of the General Directorate of C.F.R. has increased year by year. But the increase in traffic was proportionally higher, constantly accumulating a surplus in revenue, interrupted only between 1916 – 1919 when Romania took part in the First World War. 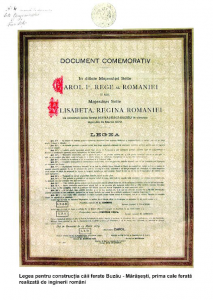 Law for the construction of the Buzău – Mărășești railway line, the first built by Romanian engineers.