Skip to content
Starting with November 15, 2022, you can buy tickets online in domestic traffic, until the departure time from the train station. Find out details
Advantageous! You have a 5% DISCOUNT when buying tickets in domestic traffic from the website, from the mobile application and from the ticket machines!

The railway connection of the Capital with the East and the West, in the beginning

In 1869, Romania became the third country in Eastern Europe, after Russia and the Ottoman Empire (in Dobrogea) which had a railway line. The first cities interconnected by a railway were Bucharest and Giurgiu.

In the summer of 1869, the construction of the Bucharest – Filaret – Giurgiu line was completed and on August 26, King Carol I left by train for Giurgiu, from where he then traveled on the Danube to Germany. This was an isolated line with a length of 67 km, which connected the capital with the Danube and a direct connection with the East and the West.

It is the tenth railway line built on the territory of today’s Romania and the first in the Old Kingdom. It was opened to trains circulation on October 19, 1869, when it was officially inaugurated. Then, two festive trains left Filaret Station – the oldest station in the Capital, at an interval of 15 minutes. The first train was driven by the builder John Trevor Barkley himself, and the second by the first Romanian locomotive mechanic – Nicolae Tănase. Because the route of the line passed near Călugăreni, where in 1595 the ruler Mihai Viteazul had achieved a success against the Ottomans, the first locomotive was named “Michaiu Bravul” in his honor. The second locomotive that ran in Romania on Bucharest – Giurgiu line was called “Călugăreni” and is currently in the patrimony of the Railway Museum in Bucharest. 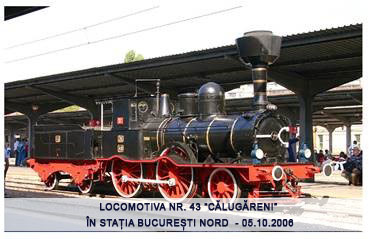 In 1872, on December 13, with the inauguration of the second station of the capital – Targoviste Railway Station (since 1888 Bucharest North), the railway connection between Filaret Railway Station and Targoviste Railway Station of 6.9 km long became usable, thus connecting a line singular with the highways that ensured the international connections between the West and the East.
On June 20, 1954, the inauguration of the bridge over the Danube from Giurgiu takes place (Friendship Bridge 3.9 km) – with a length of 2224 m – with two levels (railway and car) which made the direct railway connection of Romania with Bulgaria, through Russian border crossing.

Thus, the Bucharest – Giurgiu – Ruse railway became a main international route until 2005, when the railway bridge from Grădiștea collapsed due to floods, the traffic currently taking place through Videle.

Also, the shortest road from Romania to Vienna in 1869 was from Bucharest to Giurgiu, by train, and then by boat on the Danube to Vienna.

In the autumn of 1868, the poet Mihai Eminescu traveled to the University of Vienna, on the fresh line Vicşani – Suceava. It was inaugurated in the middle of 1868 – a section that was part of the Austro-Hungarian Empire and made the railway connection between Vienna and Suceava (1075 km).